Beef for a better world 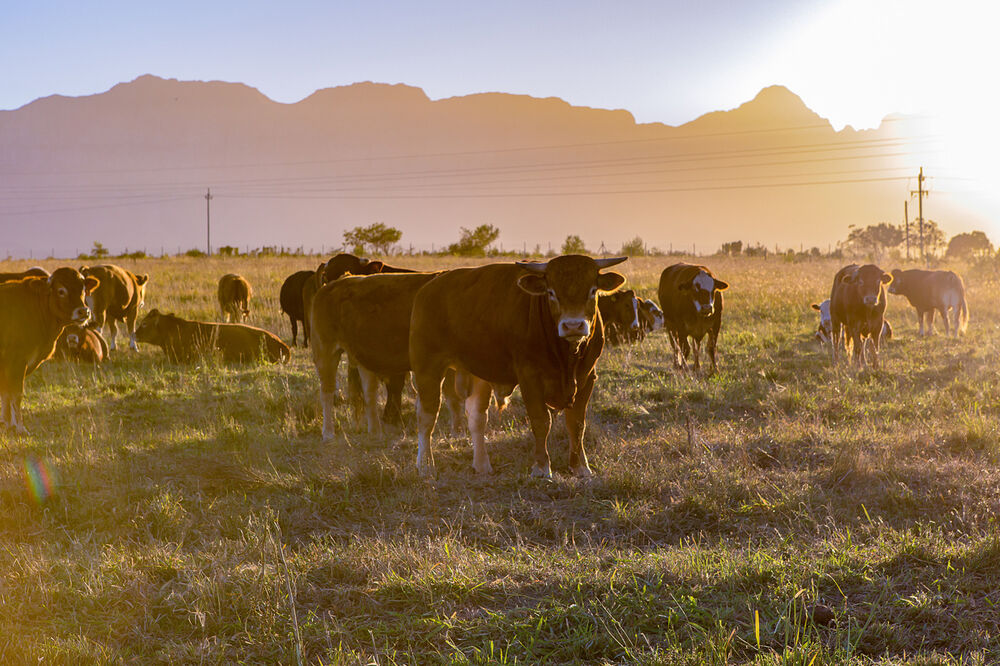 The pastured-reared beef from Spier not only tastes delicious; it also benefits the environment by helping to reduce the levels of carbon in the atmosphere.

WHAT’S WRONG WITH HAVING TOO MUCH CARBON IN THE ATMOSPHERE?

Carbon, attached to two oxygen molecules, can be found in the air around us: carbon dioxide. This is known as a greenhouse gas, because scientists believe that too much of it in the atmosphere causes a “greenhouse” effect, trapping the earth’s heat, and thereby leading to rising temperatures.

WHY IS CARBON GOOD FOR THE SOIL?

Carbon is the scaffolding on which all of life is built. Minerals housed in the carbon’s superstructure are broken down by soil microbes and these “digested” minerals help the plant to grow. Higher levels of carbon also help the soil to retain water. A 2% increase in organic matter (carbon) in the soil doubles the water holding capacity of soil.

WHAT IS CARBON SEQUESTRATION?

Carbon sequestration is when carbon is absorbed from the air into the ground. Plants do this when they grow through photosynthesis, a process requiring sunlight, carbon dioxide and water to occur. Sugars, which are mostly made up of carbon, are the primary by-product of photosynthesis and these are exuded from the plant roots to feed the microbes referred to above.

Spier uses a method called high-density grazing (pioneered by Andre Voisin and perfected by Alan Savory and Ian Mitchell-Innes) to “super-charge” the growing process of their pastures. This results in faster carbon sequestration.

WHAT IS HIGH DENSITY GRAZING?

This is a process by which Spier’s herd of more than 300 cattle graze in a concentrated space for a short period of time. They are moved twice a day, munching on 12.5 tons of vegetation per hectare, eating in the same pastures eight times a year.

Spier’s 4250 laying hens also graze the pastures and are moved daily. The hens eat as much grass as 100 cattle.

HOW DOES HIGH-DENSITY GRAZING SEQUESTER CARBON?

Carbon auditor firm C4ES, which audited 74 hectares of pasture at Spier, has calculated that high density grazing results in carbon being sequestered more than 17 times faster than normal pasture grazing. C4ES estimates that from September 2011 to January 2013, 7,852.1 tonnes of CO2 equivalent (CO2e) was sequestered into the soil.

High density grazing results in carbon being sequestered faster because it helps to grow the plants to grow faster. It does this through the following ways:

BUT… WHAT ABOUT METHANE?

Cattle release methane, another greenhouse gas, into the air. Luckily, healthy soils act as a fantastic methane sink (absorbing methane) and grass managed according to the principles introduced by Spier contain bacteria called methanotrophs, which break down methane.

WHAT ARE THE OTHER BENEFITS OF SPIER’S APPROACH TO FARMING BEEF?

Conventional beef farming involves extensive consumption of fossil fuels (which release carbon into the air), during the farming and transportation of grain feed to the cattle and when the cattle are taken to the abattoir.

Spier’s beef involves significantly fewer carbon emissions. This is because:

HOW CAN I MAKE A DIFFERENCE?

You can purchase Spier beef and chicken-generated carbon credits from Credible Carbon which places a big emphasis on “capacity building” – 50% of the net income generated from sales of the credits goes to direct employee benefits.

Spier’s grazing operation is the only one in the country that generates Carbon credits.