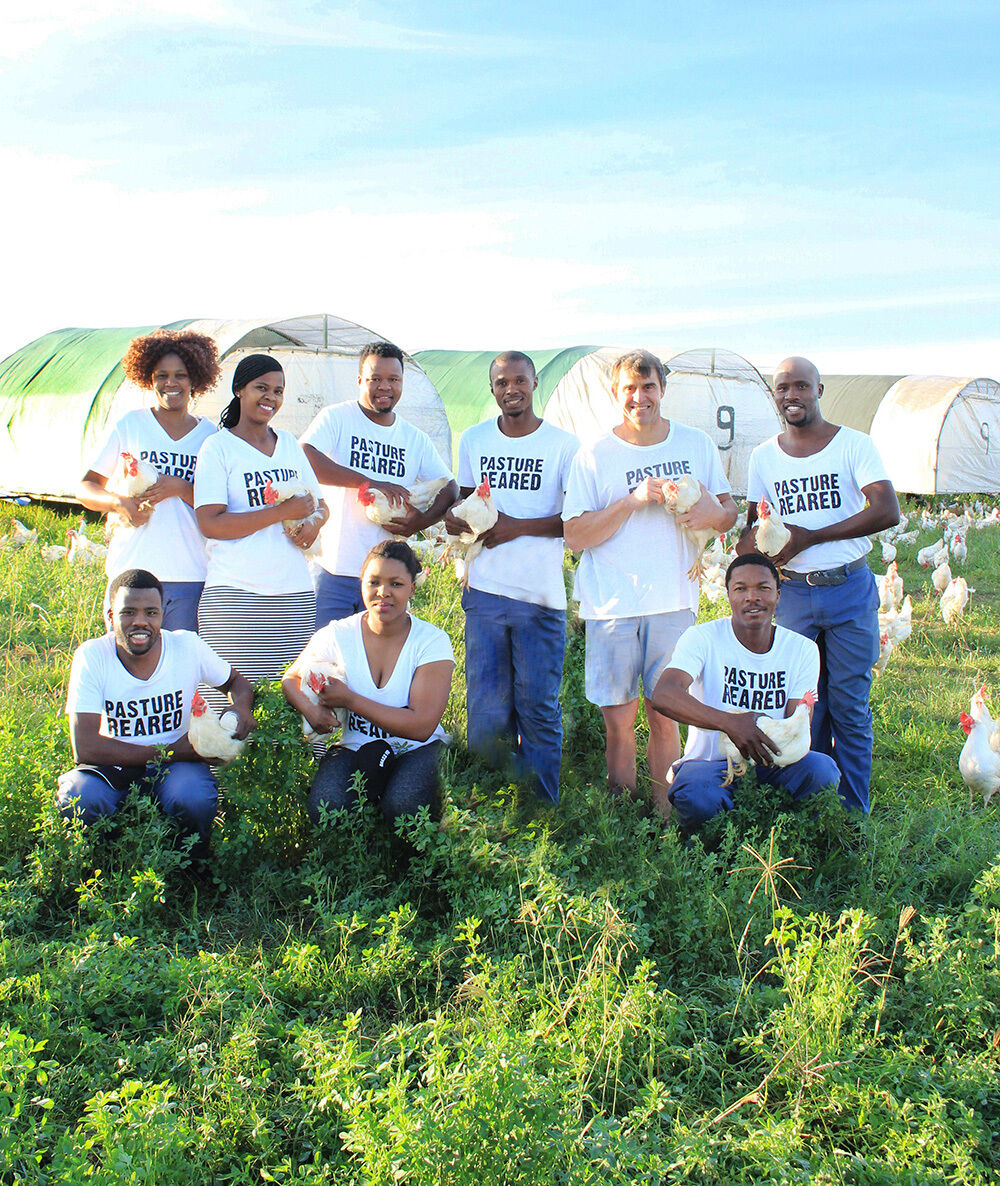 In a drive to upskill and empower farmworkers, regenerative livestock farmer Angus McIntosh has sold 85% of his Farmer Angus EGGS business to five of his former employees: Neliswa Mbengana, Zanele Hlabisa, Mbhekiseni Khoza, Menzi Khoza and Phello Ntlati. The sale has transformed the Spier Wine Farm-based company is now a 85% black-owned and 51% women-owned business.

McIntosh vendor-financed the deal, which means that the business is, in effect, paying him back a loan over time. This will keep him focused on making it a success — as he only gets paid back from its profits. The sale price for the business was calculated from a combination of stock, the value of hens, moveable goods and brand value. Based on current profits, it will be paid off in less than 4 years.

The future is looking bright, with a new deal with leading retailer Checkers having commenced in late October to supply two of its stores, Constantia Emporium in Constantia and the branch in Mill Street in Stellenbosch — with more stores to come on board in 2021. Shoppers pick their eggs out of Eggmobiles stationed in-store, designed by McIntosh and built-in collaboration with 3 Thirds.

So what’s an Eggmobile? Thobelani Mngomezulu, one of the six directors at Farmer Angus EGGS explains: “Eggmobiles are the chickens’ ‘houses on wheels’. We move them daily to help fertilise our soil at the farm. We get our chickens to graze on the pastures, which are free of any chemicals, so they can lay the most nutritious eggs. They roam our pastures all day and are only locked up in the Eggmobiles at night for their own protection. We also feed the chickens with non-GMO food that is specially made for us. Not only are we producing the healthiest eggs, but we’re also practising regenerative agriculture which is good for the soil.”

Mawethu Xamle and his wife, Neliswa Mbengana, who is a shareholder, says that being able to own a business is such a good thing for their family as it’s given them a chance to grow. Zanele Hlabisa, confesses that the most important thing for her is that she can be a part of the business even when she is not on the farm. “Being a shareholder is really a once in a lifetime experience,” she says.

McIntosh started farming at Spier in 2009. He practices regenerative agriculture through the rotational grazing of animals such as pigs, cattle and chickens on Spier’s certified organic pastures. The animals never receive growth hormones or routine antibiotics, while the land is naturally enriched, and never given artificial fertiliser or pesticides.

“The goal of regenerative agriculture is to produce nutrient-dense food, heal the earth and create employment opportunities,” explains McIntosh.

One of the major benefits of the shareholding structure is that Farmer Angus EGGS can access government funding and the leasing of state-owned property. Increased funding and space are key for the business to be able to grow. For the new owners, scaling the business to become a nationwide entity is the ultimate goal.

The Eggmobile has been gaining popularity with other small-scale operations popping up in parts of the country. More recently it received a lot of interest from the national Department of Agriculture. In a bid to fund and expand the model to other parts of the country, it recently invited Farmer Angus EGGS to design an Eggmobile-based mobile poultry operation that produces 12,000 eggs per day and is fully off-grid. The funding for this is still under review but all meetings with the Department indicate it is supportive of this initiative.

Due to it being so labour intensive, outdoor regenerative farming is an ideal way to address one of SA’s biggest challenges: widespread unemployment.

Mbhekiseni Khoza says, “Being a shareholder in a business has meant I am now able to grow as a person and I’m proud of my new role. I’d like to see more of my friends around the country being empowered in this way and through Checkers, we believe this is going to be possible.”