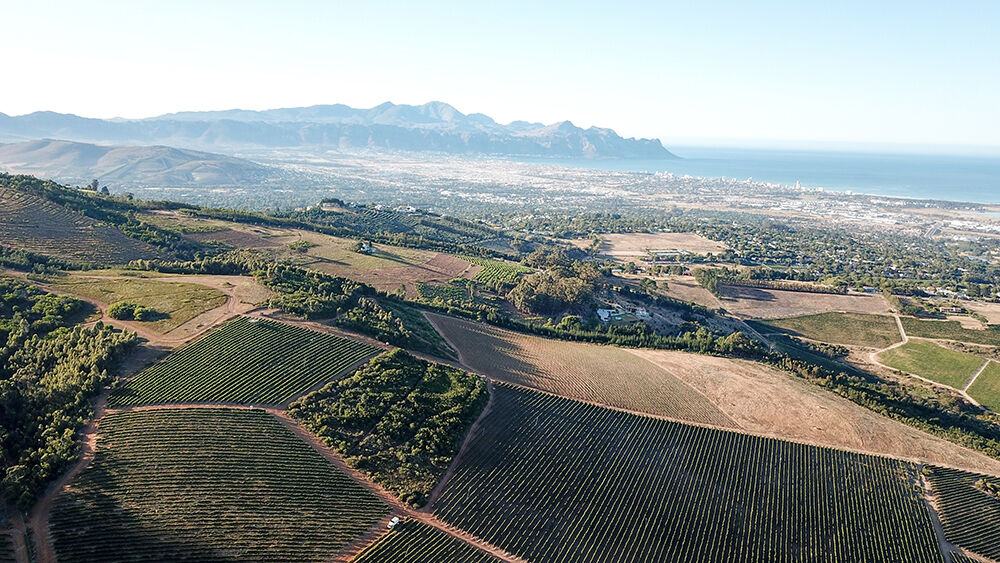 Spier’s viticulturist Bennie Liebenberg, takes an in-depth look at the 2020 harvest and why the 2020 vintage will be one to stock your cellar with.

From drought to deluges

Over the last five years, the Western Cape has suffered from below-average rainfall, warmer winters and devastating winds in the growing seasons. These conditions have made growing quality grapes challenging.

Winter 2019 had a promising start with good rains from May to July, but this fell below average between August and September.

Compared to 2018, dam levels were slightly below average for the long-term. However, a huge cold front at the end of October brought a deluge of rain across much of the province, replenishing groundwater levels in our growing areas. Dams filled by 10%.

The cold southeast and southwestern winds prevailed, causing late-flowering cultivars (such as Merlot, Shiraz and Cabernet Sauvignon) to unevenly set, and caused millerandage (when grapes vary in size and maturity) in windy and cooler locations.

Temperatures remained mild through November and December until mid-January, but spiked towards the end of February. A mild March produced excellent conditions for later ripening cultivars like Cabernet Sauvignon and Petit Verdot.

Following harvest, conditions stayed warm and dry through April and May, with rainfall below the long term average. Producers had enough water available for several post-harvest irrigations and for the fertilising of vineyards.

Due to the lack of rainfall, cover crops were planted late in May, but so far these are looking promising.

These weather conditions made managing our organic vineyards trickier than when using conventionally farmed methods. We controlled outbreaks of downy mildew with weekly copper and sulfite sprays. Tonnages and quality in the season were exceptional compared to the previous four years, despite the small losses in the late-ripening red cultivars.

We had a very early start to the 2020 harvest with the picking of Pinot Noir and Chardonnay commencing in mid-January.

Stellenbosch and Robertson areas were first to start, followed by the cooler regions of Durbanville, Darling and Elgin. The grapes for our Méthode Cap Classique were harvested in near-perfect conditions, producing balanced base wines with fruit, mouthfeel and excellent natural acidity.

Early Chenin Blanc and Sauvignon Blanc started ripening in mid- to late-January, and the ripening of nearly every other cultivar accelerated due to a heatwave in mid-January. Most of these grapes were harvested at night and delivered from 5:00am onwards.

Early crop levels confirmed that 2020 was going to offer an above-average yield. Certain vineyards produced up to 30% more grapes than the previous seasons — and with great quality too.

To ensure even ripening of the larger crop, we kept the vineyard canopy slightly larger and prevented stress in the vineyard with supplementary irrigation. Chardonnay and Chenin Blanc grapes ripened beautifully with great sugar levels, producing the standout white wines of the 2020 season.

The warmer conditions during harvest produced an even ripening curve for most of the red cultivars, and although the hang time for ripening was shorter than normal, the red varietals produced optimal sugars, lots of red primary fruit and soft, complex tannins. The cellar experienced a bottleneck when the Pinotage and Merlot from all various growing regions ripened at the same time at the end of February. Careful planning across the day and night shift, and utilising our three cold stores to keep fruit cool, meant our team was able to rise to the challenge. The stand out red cultivars for 2020 are Pinotage, Cabernet Sauvignon and Petit Verdot.

In a nutshell: An excellent harvest

We will remember the 2020 harvest as a break from the previous four difficult years.

Crop levels were back at long term levels, quality was excellent throughout our whole range of cultivars, and wines from 2020 will deliver full and fruity wines with longevity.

Didn't book? Pick from our selection of ready-made salads, sandwiches and snacks at the Farm Cafe.