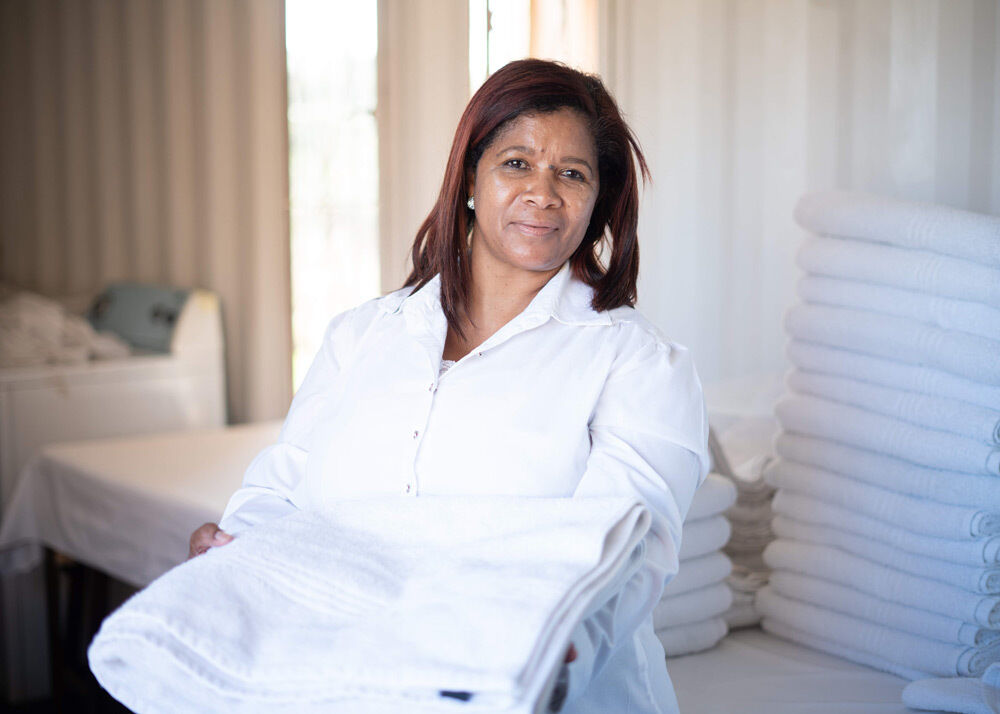 Klein Begin, the micro-enterprise based at Spier Wine Farm, recently purchased the near-waterless Xeros washing machine, drastically reducing the amount of water and electricity required for each load.

During high season, Klein Begin’s team of eight people handles between 2000 and 2500 items daily – including table cloths, towels, serviettes and pillowcases from the Spier Hotel and Restaurant, the Spier Spa and other restaurants on the estate.

While a traditional washing machine is capable of washing 25 hand towels, the Xeros is significantly larger, and is able to fit 200. This increased capacity will allow Klein Begin to expand their offering to include Stellenbosch-based guesthouses and restaurants, as well as Spier employees.

Spier’s commitment to creating sustainable jobs and encouraging enterprise development is aligned with it’s Growing for Good initiatives, to develop jobs in the local community. In 2004, the on-site laundry was established through a tender process. In 2018, Spier extended an interest-free loan to Roslyn Samuel, the current laundromat owner.

“For many years, Klein Begin has offered a thorough and reliable laundry service to our business,” says Joep Schoof, Spier’s GM. “It was our confidence in Roslyn’s work ethic and business smarts that resulted in us providing her with an interest-free loan to purchase the Xeros machine.”

About the Xeros washing machine:

The Xeros revolutionary technology replaces water with millions of reusable polymer beads, typically reducing water use by up to 75% when compared to a traditional laundry machine. The cleaning beads are re-usable hundreds of times and fully recyclable, allowing them to be remade into products such as car fascias.

Traditional washing machines rely on high temperatures and large amounts of harsh chemicals to get fabrics clean. According to Fanute, its South African distributor, Xeros bead cleaning achieves a cleaner result with less detergent and lower temperatures (and thus less power). Not only is this good news for the environment, it also means less wear and tear on fabrics. This because the beads themselves are gentler than the tumbling action of a traditional washer – it’s a bit like having millions of tiny hands gently kneading the fabric.

Other micro-enterprises Spier supports include:

Staff Canteen: Spier has provided former Spier employee Noviwe Lubisi with the space and all the necessary equipment and crockery to run a canteen for the staff. The company also gave her a loan to assist with start-up costs when she launched her business in 2018. She offers employees a delicious, warm cooked lunch and dinner as well as miscellaneous items and snacks.

Debinisa Transport Company: Caswill Mentoor was a driver and messenger for Spier when, in 2009, he approached Spier to partner him in his own transport company. Spier facilitated the formation of Debinisa, a black-empowered joint-venture between Caswill and one of its established transport contractors, Louw Vervoer. In addition to being used extensively by Spier, Debinisa also services a number of other customers.

Primo Vino Packaging and Reworks: Employing 10 people, Primo Vino reworks and repackages Spier wines to meet the requirements of different customers and markets. Established in 2009 by Shaun Theunissen, a former Spier employee, Primo Vino operates from a warehouse in Cape Town where all Spier exports, warehousing and local distribution is centralised.

Mountainview Tank Services: Owned by Reynold Visser, this business offers a bulk wine transport service, taking wine to Spier’s bottling plant supplier from either Spier’s own cellar or from the cellars of Spier’s bulk wine suppliers. With a secure service commitment from Spier, Visser secured bank finance, acquiring his own vehicle for the start-up.

Spier’s longstanding and wide-ranging support of local micro-enterprises – which has taken the form of financial assistance, mentorship and preferential supplier agreements – forms part of Growing for Good, where the wine farm invests in learning initiatives that empower communities to create positive social and environmental change.

“Our focus on learning is because of its ability to unleash the potential of people. This catalyses a ripple effect of positive change that goes far beyond Spier,” says CEO Andrew Milne. “The Growing for Good icon reminds consumers that, by choosing Spier, they are contributing to a positive social and environmental impact. Their valued support ensures we can continue to invest in projects that make a meaningful difference.”