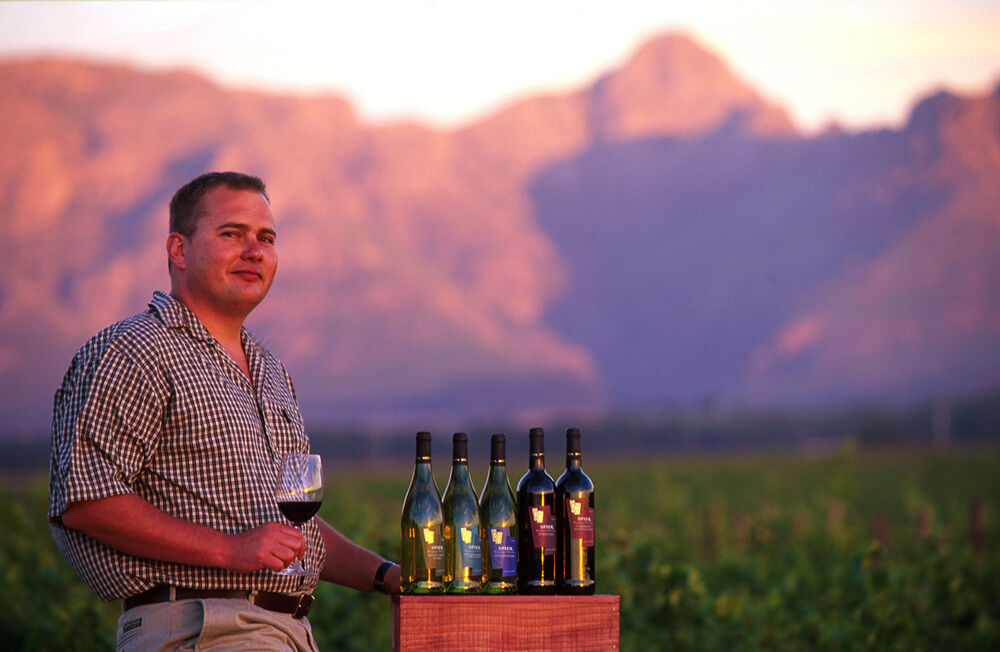 After 25 years of serving as Spier’s Cellar Master, Frans became Managing Director in 2021.

Born in Windhoek, Frans Smit grew up on a table grape farm near the Northern Cape town of Kakamas, on the edges of the Kalahari. He studied winemaking at the prestigious Elsenburg Agricultural College in Stellenbosch. One of the top-scoring graduates of the class of 1995, he joined Spier the following year. In the time since, he has harnessed more than three centuries of winemaking history to transform Spier from a small cellar into one of South Africa’s leading – and most accoladed – wineries.

After 25 years of serving as Spier’s Cellar Master, Frans became Managing Director in 2021. Becoming MD as the South African wine industry grapples with the aftershocks of COVID-19, supply chain shortages and logistical bottlenecks has highlighted the importance of being “both ambitious and realistic” for him.

Pragmatic problem-solving, flexibility and building resilience are the order of the day. He says: “I’m proud that everyone in my team plays their part – for the ship to sail smoothly, it’s ‘all hands on deck’. I’m committed to giving the team the support and guidance they need to help them succeed.”

Under Frans’s leadership, Spier has been lauded as Editor’s Choice: Winery of the Year 2022 by the prestigious Platter’s Wine Guide which recognised the winery “for excellence at both the rarified and volume ends of the market”. But he’s not one to rest on his laurels. Pointing out that Spier was ranked 68th in the World’s Best Vineyards 2021; he’s determined for it to soar to the top 10. As an experience for visitors, he wants wine at Spier to take centre stage: a place where both connoisseurs and the simply curious alike can deepen their enjoyment, appreciation and knowledge of wines.

“A visit to Spier – one of the oldest wine farms in the country – helps explain the breadth and depth of our offering in a very immediate and compelling way,” he says. “I’m proud that we’re capable of producing absolutely world-class wine consistently – this is the story we need to tell.” One of many examples of this is the Spier Creative Block 5; the 2018 vintage of this Bordeaux-style red blend was the 2021 Veritas Wine Awards’ overall champion wine, receiving the competition’s Duimpie Bayly Veritas Vertex Award.

In it for the long-haul

As a leader, Frans is guided by an ethos of stewardship – a genuine and deep-rooted care for people and the land over the long-term. For him, treading evermore lightly on the earth is more than just a commitment – it’s an ongoing evolution that has received renewed emphasis with a dedicated team to steer Spier’s journey to net zero by 2030. This journey will include mapping its entire supply chain’s carbon footprint and working with suppliers to reduce emissions and boost soil health.

“Healthy, carbon-rich soils means better quality grapes and greatly increased water retention,” he explains. As the climate changes in the coming years, water scarcity will be the Cape wine industry’s biggest challenge. Carbon-rich soils that are better able to trap this precious resource are thus a crucial step towards drought resiliency. “The clock’s ticking: to achieve long-term sustainability, we need to act now,” he says.

In recognition of his talents and growing success in the cellar, Frans’s most illustrious peers invited him to join the Cape Winemakers’ Guild, a 47-strong association of South Africa’s finest winemakers, in 2009. That same year, Spier’s flagship wine brand launched, bearing his name – Frans K. Smit – as a majestic, standalone red blend (a companion white blend joined it in 2015). Crowning this year of milestones, though, was when his wife, Lacea, gave birth to their twin daughters, Mariella and Elizabeth.

While he’s lived in the Stellenbosch Winelands since his student years, Frans has not forgotten his Kalahari roots – far from it. He visits the remote semi-desert region as often as possible, enjoying quality time with family, and soaking up its silence and starry skies. Regardless of where he is, though, his preferred way to unwind is tending to a fire with a glass of 21 Gables Chenin Blanc in hand. “The best kind of braai is a leisurely one with my girls – one that involves plenty of courses,” he says. The menu often includes childhood favourites from his childhood – skilpadjies, boerewors, sosaties and a rack of lamb ribs or chops.