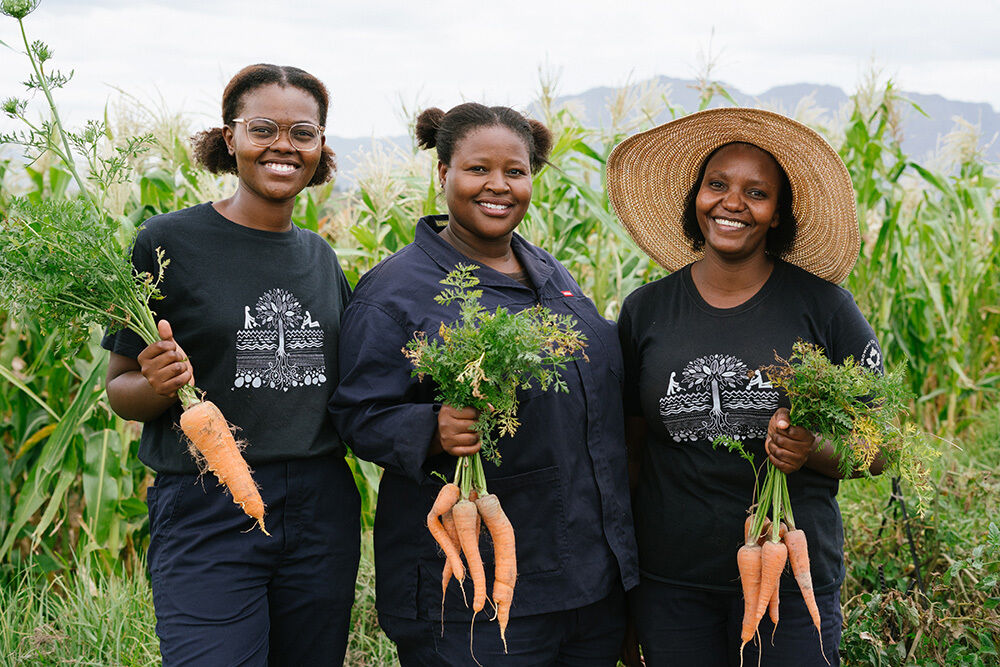 This Women’s Month Spier is celebrating the women-led food- and tree-growing projects that it supports.

In vulnerable communities in the greater Stellenbosch area and beyond, these projects are boosting food security, providing livelihood support, and rehabilitating the environment.

“We are proud to be associated with these dynamic, hard-working and talented women,” says Mariota Enthoven, Spier’s owner.

In March 2019, Spier partnered with Woolworths and the Sustainability Institute and its AgroEcology Academy to launch the Living Soils Community Learning Farm. Based at Spier, it produces nutritious food using ecologically-regenerative farming methods.

Rirhandzu Marivate is the farm’s project manager, who has overseen the sterling efforts of the farm’s first three interns — all women originally from the Eastern Cape: Phutuma Mgu, Vuyolwethu Zicina, Thandiwe Mtyingizani. After clearing the land and preparing it using agroecological methods to regenerate the soil with beneficial microorganisms and nutrients, the trio planted a wide range of vegetables. The first harvest was in November 2019; by March this year, an astonishing 1700 kilograms of produce had been harvested – from just under a hectare land.

“It was a wonderful moment when we delivered the first order to the Sustainability Institute, to use in the meals prepared for approximately 200 impoverished and at-risk children from the Lynedoch community that attend one of the schools at the Institute,” says Mariota.

Following the conclusion of the three interns’ internship, they have stayed on at the farm. They have taken on leadership positions to mentor the seven new interns that joined the farm in 2020

“Vuyo and Thandi have also expanded their skills to learning and working in growing seedlings for Living Soils in the nursery. These three ladies will continue with the project as we hope that they continue to grow and take up more space as team members, facilitators and farmers,” says Mariota.

Lesley Joemat is a Spier employee and the coordinator of Tree-preneurs. Through this project, she has taught over 100 people from seven of the Cape’s poorest communities – including Blikkiesdorp, Tafelsig and Lynedoch – how to care for indigenous trees and plants. Joemat gives these Tree-preneurs seedlings to nurture. Once the plants reach 60cm in height, they are exchanged for much-needed essentials, including food vouchers, clothing, agricultural goods, tools, bicycles and educational support.

Joemat has built a strong personal relationship with the growers. When she is not out visiting them to distribute seedlings, containers, soil and compost, and to offer advice on growing trees, she’s busy running the Tree-preneurs nursery at Spier, which is home to over 23,000 indigenous trees, plants and succulents. Many of the trees are planted in disadvantaged areas of Stellenbosch in need of greening.

In partnership with the Sustainability Institute, 13 members of the local community (predominantly from the Lynedoch area) were recruited to speed up food production at Spier and to learn how to grow their own fresh, nutritious produce at home.

“If people learn how to grow their own food, they will never go hungry again,” says Megan McCarthy, who oversees the produce gardens at Spier. An expert in using eco-friendly techniques to grow food, she has been providing hands-on training in demonstration plots at Spier.

In addition to growing their gardening skills at Spier, the 13 young growers also receive a nutritious cooked lunch daily and have received seedlings to plant at home. The organic produce harvested at Spier will be distributed regularly to hungry households in the community.

Spier’s support of tree-growing and small-scale, regenerative agriculture forms part of Growing for Good, where the wine farm invests in learning initiatives that empower communities to create positive social and environmental change.

“Our focus on learning is because of its ability to unleash the potential of people. This catalysis a ripple effect of positive change that goes far beyond Spier,” says Enthoven. “The Growing for Good icon reminds consumers that, by choosing Spier, they are contributing to a positive social and environmental impact. Their valued support ensures we can continue to invest in projects that make a meaningful difference.”

Get in touch to enquire about our private meeting rooms available.

Open daily from until 2 January from 11:00 - 15:00. Thereafter on weekends and public holidays, weather permitting.