Spier is committed to reducing its carbon footprint and nurturing healthy, carbon-rich soils. We aim to reach net zero by 2030. This means reducing our carbon footprint as much as possible, and offsetting the rest, to align with the Paris Agreement’s goal of limiting global warming to 1.5°C. Our net zero target takes into account the carbon emissions from our direct operations, our energy consumption as well as our entire value chain (including suppliers and customers). 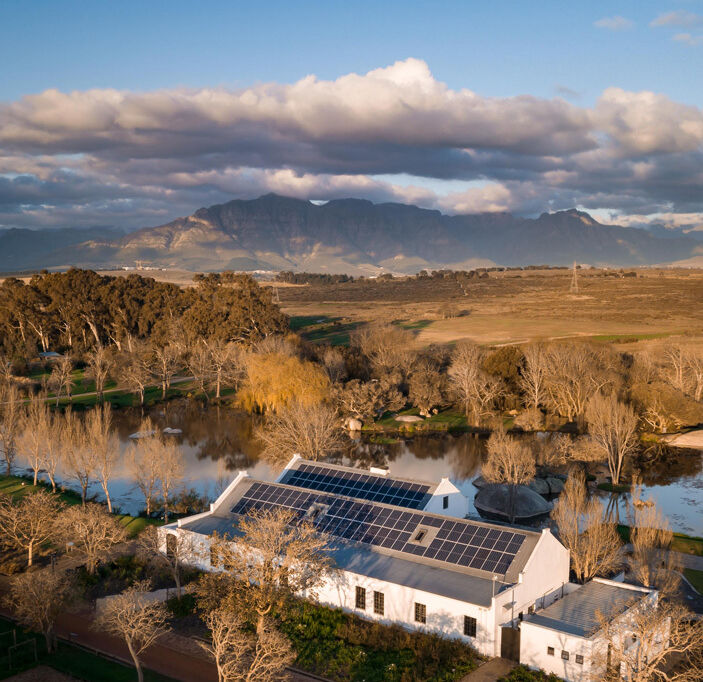 In 2014, we began calculating the carbon emissions generated by our direct operations using a carbon calculator. The Confronting Climate Change Initiative has recognised Spier as one of the Carbon Heroes of the SA fruit and wine industries for reporting our carbon footprint for at least three consecutive years.

By 2017, we had slashed our greenhouse gas emissions derived from electrical consumption by this amount compared to 2009 levels.

The following areas of focus underpin our journey to net zero.

We have worked hard to reduce our energy consumption through energy-saving methods and devices. As a result, by 2017, we had reduced our greenhouse gas emissions derived from electrical consumption by 30% based on 2009 levels. Currently, nine solar installations supply our farm with electricity. In 2021, these generated over 280,000 kWh, resulting in 107,808kg of carbon dioxide savings. As energy is responsible for roughly 80% of our carbon emissions, we are continuing to explore ways to expand our generation of renewable energy sources in the coming years.

Typically, making something with recycled instead of raw materials consumes much less energy (and therefore results in fewer carbon emissions). Secondly, waste in landfills results in the release of planet-warming methane as it decomposes, so the less that goes to landfill the better.

By 2011 we had been consistently recycling 85% of our solid waste. More recently, we have been sending 0% of our waste to landfill. Between 95-98% is recycled and the balance is sent to a waste-to-energy plant. In the twelve months to May 2022, our recycling and recovery efforts resulted in 73 832kg less CO2 equivalent in the atmosphere.

Vegetation in biodiverse habitats suck carbon out of the air, and store it in the earth. In 2012, the Spier Nursery was established, responsible for the clearing of water thirsty alien vegetation and the propagation and planting of “water-wise” indigenous species. In the ensuing decade, it planted over 100,000 different trees, shrubs and fynbos and over a million bulbs. On the farm, these newly replanted tracts of indigenous vegetation, and previously existing renosterveld vegetation, are conserved.

Regenerative agriculture methods can also increase levels of carbon in the soil. This is important because higher levels of carbon in soil improve water retention. For example, a 2% increase in organic matter (carbon) in the soil doubles the water holding capacity of the soil. Increased water retention makes farmland more resilient during drought and makes irrigation more efficient (you can use less water to irrigate healthy, carbon-rich soils because more of it is being retained).

In 2008 Farmer Angus McIntosh began farming at Spier, using regenerative and biodynamic methods which promote biodiversity, restore soil health and sequester carbon. Farmer Angus plants a diverse assortment of cover crops like oats mixed with vetch (a member of the pea family) between our vines. A tractor and roller flatten the crops, pushing nitrogen back into the soil and creating a dense carpet; we add compost and even feathers to create a nutrient-rich mulch that boosts soil carbon levels. Not only does this preserve the water in the soil more effectively, but this method also prevents weeds (which compete with the vines for water) from sprouting.

Our herd of over 300 cattle graze in a concentrated space for short periods – a method known as high-density grazing. They are moved twice a day, munching on 12.5 tons of vegetation per hectare. 4250 laying hens also graze the pastures and are moved daily. The hens eat as much grass as 100 cattle.

At Spier, we believe in sharing the insights we’ve gained from developing healthy, carbon-rich soils on our own farm so that others in the industry may also benefit. We will be working with grape growers on methods to improve soil health and sequester carbon. This will: